By Jiajie Li and Niansong Zhang 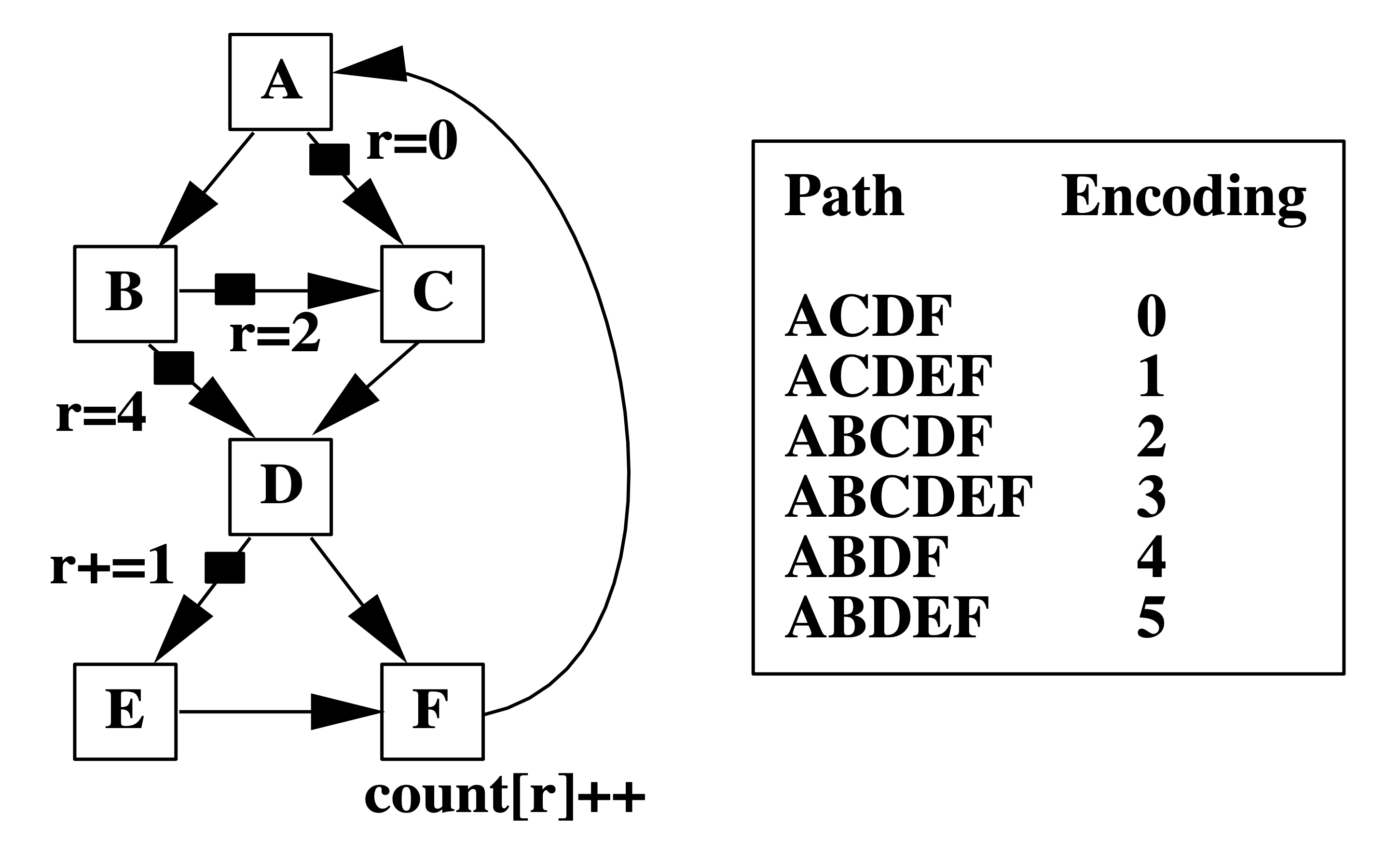 This paper addresses how to count each path’s execution times in a CFG with as little cost as possible. The algorithm has three steps. First, transform the CFG into DAG with a single back edge by removing the loop and adding dummy edges. Second, assign each edge a number so that each path sums to a unique encoding. Third, select edges on the least frequently executed paths to place instrumentations, and push the numbers to instrumentations while ensuring each path still sums to a unique encoding.

The “old” way to identify heavily executed paths in a program is to approximate path frequency with edge or vertex frequency. However, this estimation is not accurate. 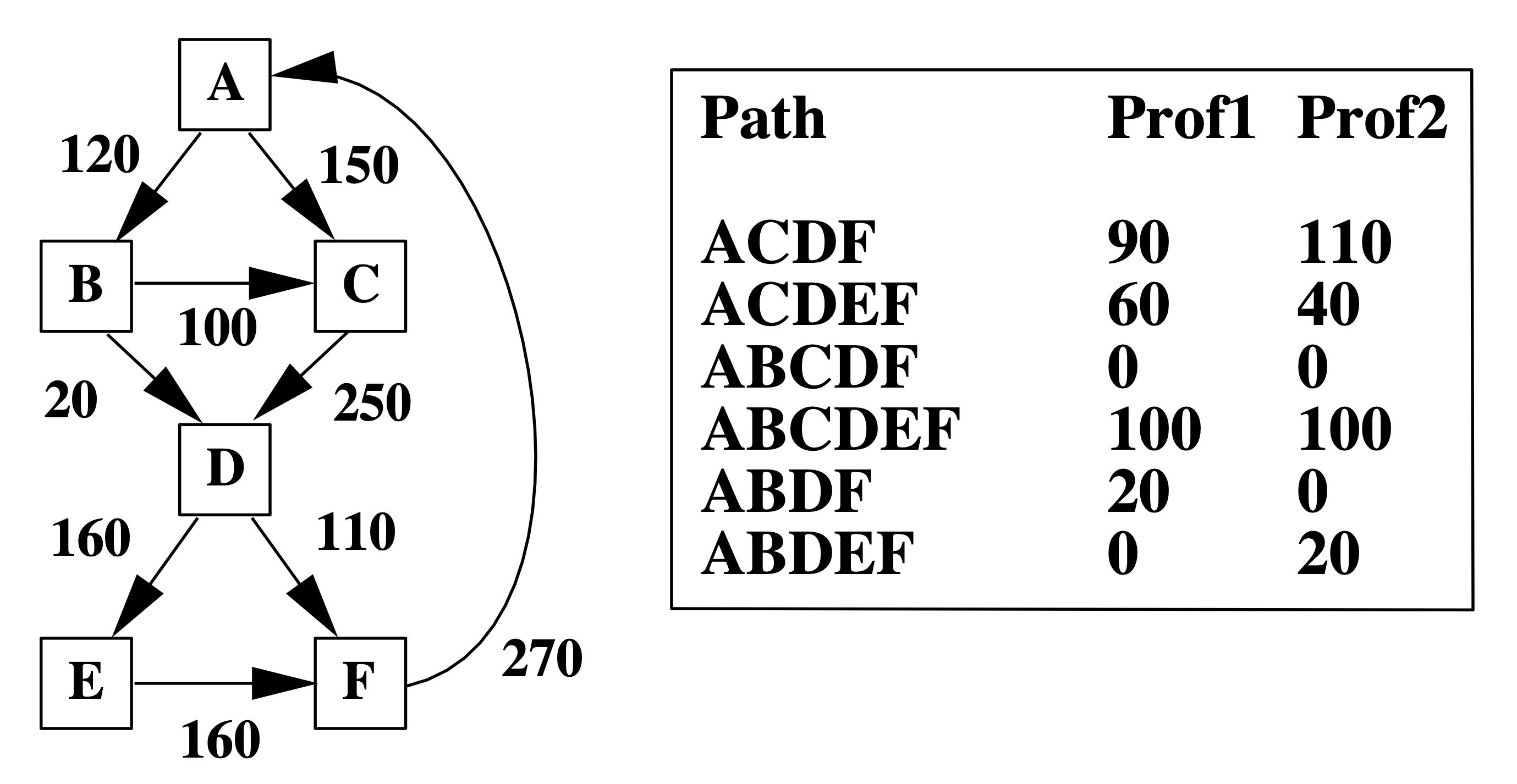 Also, given an edge profiling result, a commonly used heuristic to select a heavily executed path follows the most frequently executed edge out of a basic block, which identifies path ACDEF in the above example. However, this path is not the most frequently visited in both Prof1 and Prof2, showing the inaccuracy of edge/block profiling.

The naive way to count how many times each path executes is to exhaust every path in the CFG and label each one. However, this quickly becomes intractable as the CFG becomes large, or the CFG contains cycles with infinite paths.

The essential idea behind path profiling is to encode paths with states. When passing through edges, we increment a register and naturally arrive at a unique number for each path. Furthermore, we can reduce the times we increment the register by placing “instrumentations” on some edges. This process is also “reversible”: we can find out the exact path in the Control-Flow Graph (CFG) given the encoding of that path.

The paper starts from a CFG with a single back edge and generalizes to CFGs with multiple back edges. The experiment section evaluates the efficient path profiling algorithm across SPEC95 benchmarks and demonstrates a 30.9% runtime overhead on average.

How do we generate unique encoding for each path? We use the following simplified example to illustrate intuition.

There are four paths in the graph; we now assign a value to each edge to make the path sum unique. We label the first outgoing edge to zero at the root node. Since we know along that edge there are three paths, we label the second outgoing edge with three.

Therefore, we count the number of paths from leaf to node. In other words, we visit vertices in the reverse topological order.

[Discussion]: based on the discussion in class, we think the time complexity of this algorithm can be represented as both O(n*n) and O(e). Because every edge is only visited once.

Instrumentation aims to minimize the profiling overhead, namely the latency and memory overhead of incrementing registers and counters. Concretely, we want to increment the register as few times as possible. Therefore, the paper develops an approach to select the least frequently executed edges based on a prior edge profiling result.

The edges in the graph but not in the spanning tree are called chords. With a spanning tree maximizing the edge frequency sum, the left chords are the edges least frequently executed. Therefore, we place the instrumentations on these chords to minimize the times we increment the path encoding register.

Correctness always comes first over efficiency. We need to ensure that each path still sums to a unique number after instrumentations are placed. The paper adopts the “event counting” algorithm to identify the unique loops formed by chords and spanning trees and “push” the value in the loop to the instrumentations. 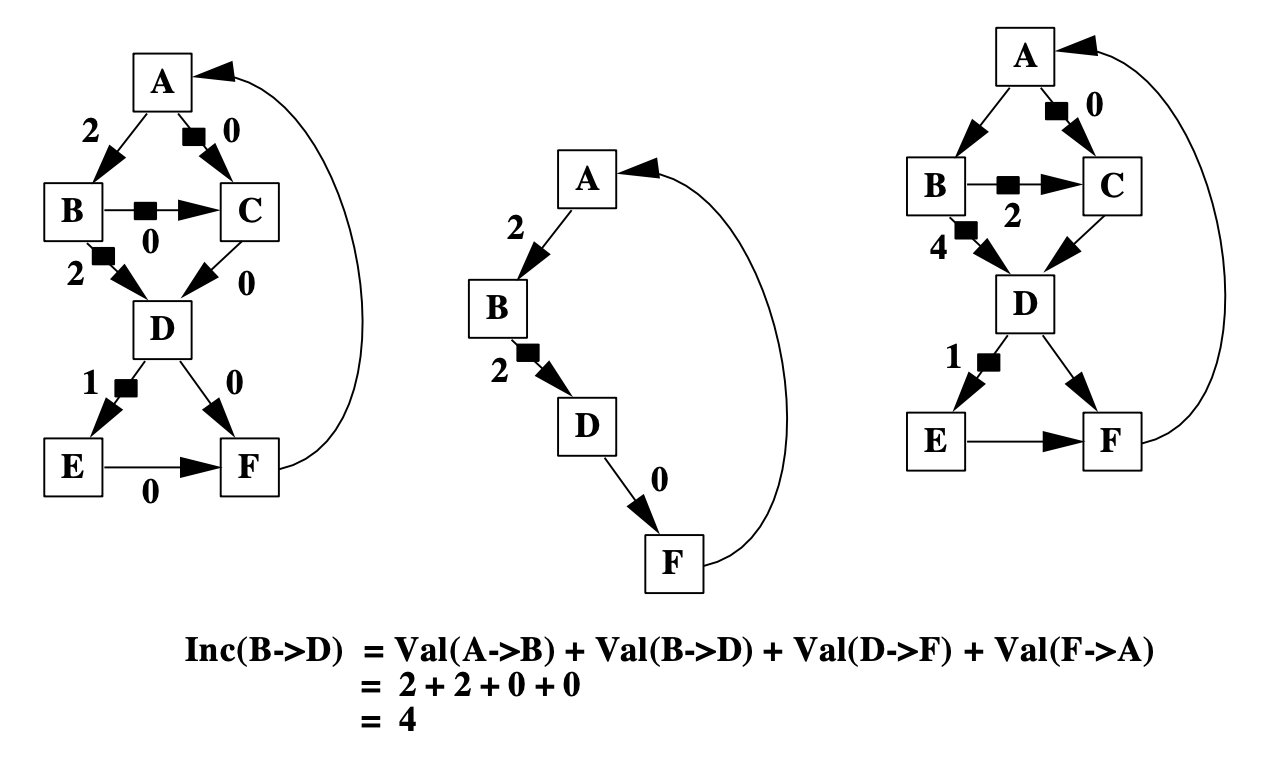 Use event counting algorithm to decide increment values on instrumentations. 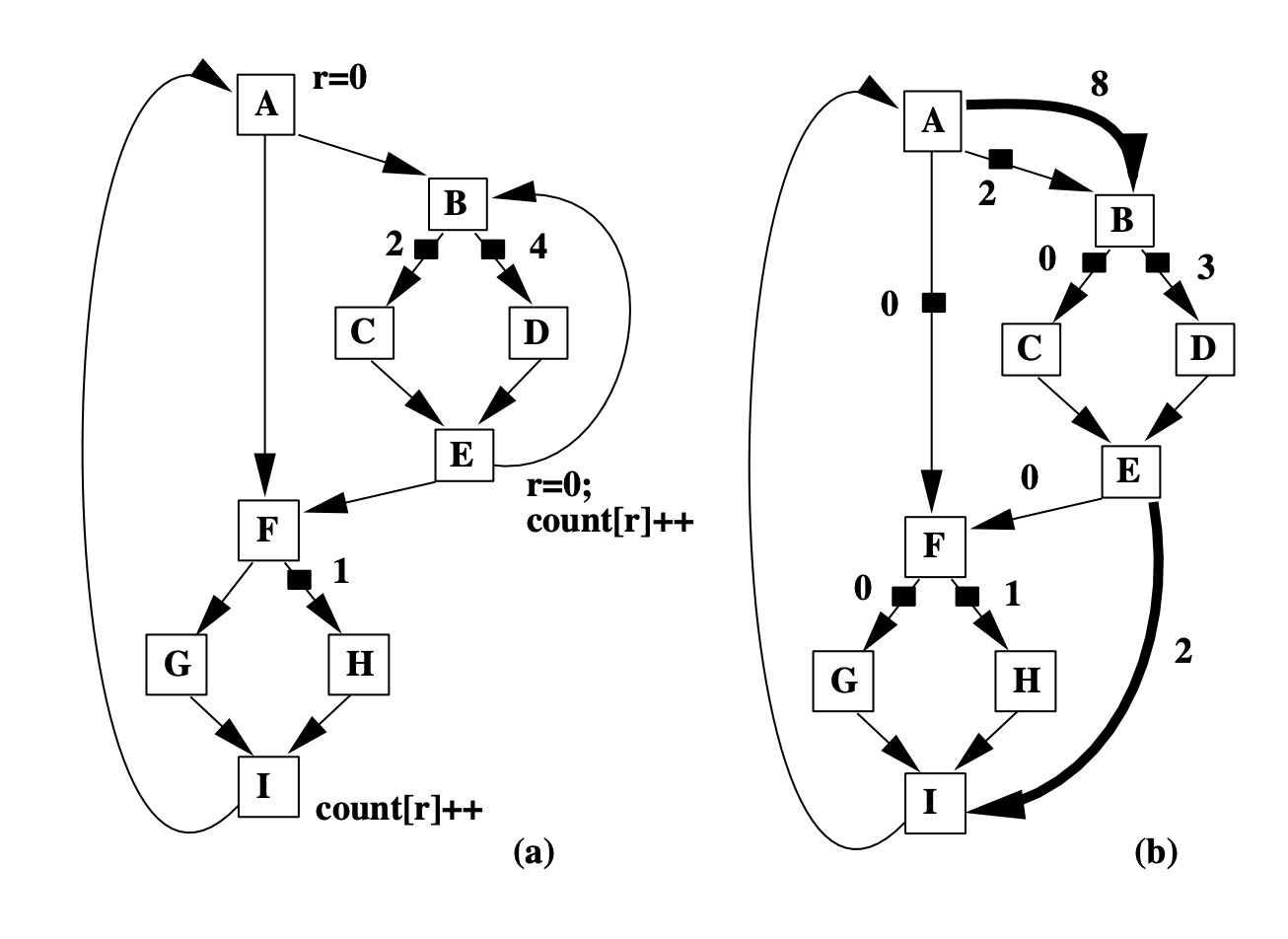 Removing back edge and creating dummy edges for general CFGs

[Discussion]
An intuitive way to understand why adding dummy edges works: the original back edge E->B is denoted as E->I->A->B in the transformed graph with the help of dummy edges. 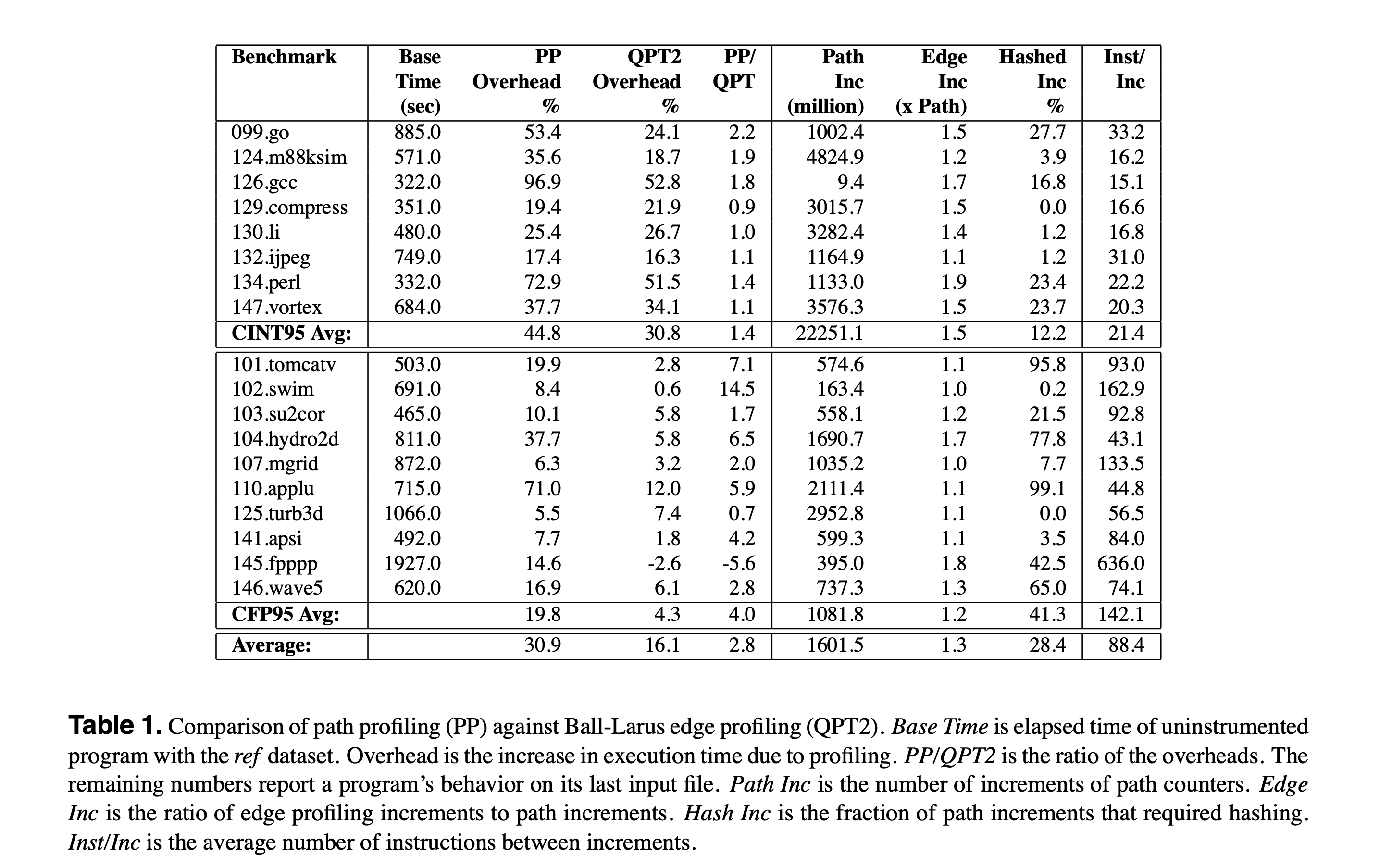 Is the overhead acceptable?

We discussed it with the conclusion that it depends (oh, the ultimate answer!).

It depends on the application and how frequently you need to use path profiling. For example, if we use it in JIT compilation and only profile it once, then 30% overhead is acceptable for its improving performance.

It’s also worth noting that the result presented in this paper might be the worst-case scenario of runtime overhead because the compiled SPEC benchmarks execute very fast. But in real cases, we may profile at the bytecode level. Then the overhead ratio might be lower because bytecode execution is slower.

Is it efficient enough?

We need to run edge profiling first and determine where we will put our instrumentation. Only after that, can we run path profiling. This additional overhead makes readers think that the Ball-Larus method would not be as efficient as it claims in the paper.

Some other works also raise questions on it: Kumar et al. [1] claim that methods like Ball-Larus algorithm take significant time to identify profile points in the program, cannot be used in dynamic (JIT) compilation.

We think the phase of identifying instrumentation could be accelerated by only analyzing a tiny and representative sample of the entire program because we only need a rough idea for the edge profiling result. There is also an interesting idea to adopt static program analysis methods like “constant propagation” to know some deterministic value range of certain variables to know additional information about edge profiling without any runtime analysis.

Work built upon this method

What applications will benefit from accurate Path Profiling?

Profile-driven compilers and software test coverage are two applications that would benefit from accurate path profiling mentioned in the paper. We further discussed how to perform the optimizations given the path profiling information.

For functions with many paths, allocating an array entry for all program paths is prohibitively expensive, if not feasible [2]. Vaswani et al. [1] propose preferential path profiling (PPP): separating interesting paths from other paths and assigning a set of unique and compact numbers to these interesting paths. This enables the PPP implementation to record path information in an array instead of a hash table.

Ball-Laraus used to have an implementation in-tree in LLVM. But it was unmaintained and was removed in 2013.